I love crowns and tiaras and as a designer jeweller I have done some extensive research over the years in order to "see every crown" on the planet. I include in this collection of research only official and historic crowns of real countries and royal families. Crown Jewel Collections, costume jewellery crowns and those made for movies could be discussed in another context or might be added once I have exhausted the initial topic of this blog. I have never seen any of the crowns in real life although it is a dream of mine to travel the world on a crown tour. This blog will however take us around the entire planet as I share photos brief histories and the location of every historic crown still in existence today. My thought is to arrange the blog according to location and to actually take a trip around the planet starting on the Greenwich Meridian and moving west around the planet. Please remember that the main aim of this blog is to locate the actual whereabouts of the various crowns and posts are organised by location.

I suppose it is poetic justice that our starting point (1 on the map above) corresponds geographically with the most famous Crown Collection in the world, that of the United Kingdom of Britain. Hopefully I will share some unknown fact, some unknown photos and some unknown crowns from this very well known collection.

Made from solid 24kt gold and now permanently set with 444 semi precious stones from the personal collection of George V. It weighs more than 2kg and Queen Elizabeth was said to practice wearing it for weeks preceding her coronation to get used to the weight. It is only worn once officially for the act of coronation and never again after that.

If one could, price the crowns of for commercial sale then this one could be expected to fetch the highest price. The reasoning would be that the second largest, (317.4 carats) flawless top colour diamond in itself, would be worth more than any other crown. However, the Cullinan II, set right in the front of the circular band is combined with more than 2000 smaller diamonds and numerous emeralds and sapphires as well. As if that isn’t enough, you would have to add the value of the exceptional Black Prince Ruby, (a very rare red spinel) set just above Cullinan II and then at the back of the crown there is the massive, (104 carat) Stuart sapphire to also consider. 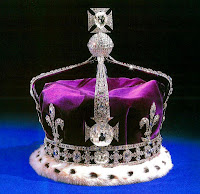 Controversy, intrigue and disaster has led to the legends surrounding the Koh’I’Noor diamond. The name means “mountain of light” and it is set as the central feature of the crown of Queen Elizabeth, wife of George VI. There is a belief, that whoever wears this diamond, will rule the world but if he is male, that he will either die early, horribly or both. Tracing the history of its path seems to show the legend might have truth in it, certainly, the Queen Mother ruled the hearts of the Commonwealth in her lifetime. This crown is unique in the fact that it its metal frame was the first and now only crown in this collection to be entirely manufactured from Platinum.

More than 6000 diamonds and some rubies, sapphires and emeralds, all from Indian origin and supplied by George V himself, were used in the manufacture of this crown. In 1911 after his coronation in , a great spectacle was arranged for the king to receive the official homage of the Indian Maharajas and other princes. For this event, full regalia were required, but an ancient law forbade the Crown Jewels to leave British soil. It was then decided to make a crown especially for this “Durbar in ”. 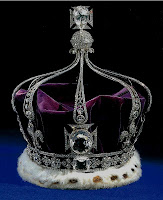 Elegant and regal, set with diamonds. A crown fit for the awesome Queen Mary who was said to be the woman who has worn the greatest amounting value of diamonds and precious stones for a single person in the 20th century. The arches are detachable along with interchangeable sections for the frontal maltese cross. Currently the three largest diamonds, including the Koh’I’Noor, have been removed and replaced with Quartz crystal copies. 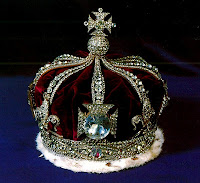 Originally, this crown, made of gold and silver, contained the Koh’I’Noor, as has been the tradition for Consort Crowns since this one. Made for Queen Alexandra, the wife of Edward VII, it is displayed today for historical purposes and so is merely set with pastes. There is an interesting legend surrounding the crown being set with paste. It is officially thought that the "original' diamonds were removed when they were required for Queen Mary's new crown and then replaced by glass copies for the sake of displaying the crown in the Tower. The mystery is however that the settings show no evidence of ever having been tampered with which suggests that the crown was never set with diamonds but rather with glass from the start. The theory is, that Queen Alexandra who had a complete disregard for the value of stones thought it would be more convenient to not have to bother with the risk of wearing protocol laden and priceless historic stones. She secretly instructed the jewellers, to make life easier for them and herself, to set the crown with glass and followed by being crowned with the fakes. 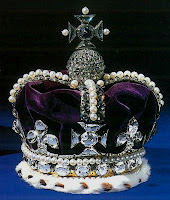 Crown of Queen Mary of Modena 1685 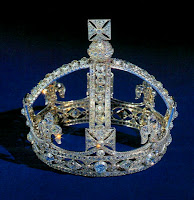 Queen , being of small stature, found the heavier Imperial State Crown, uncomfortable, and even flatly refused the use of the St. Edward’s Crown on her coronation. She instead commissioned this smaller crown, incorporating all the symbols of empire, yet dainty and comfortable to wear. It is by no means compromised in value as it is liberally set with substantial diamonds. 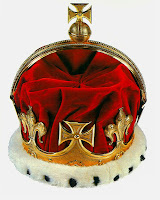 Coronet of the Prince of Wales 1901 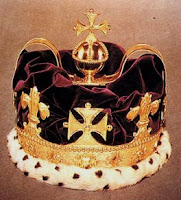 Coronet of the Prince of Wales 1728 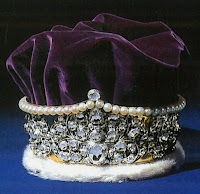 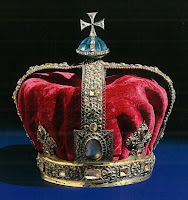 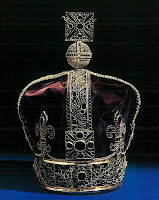 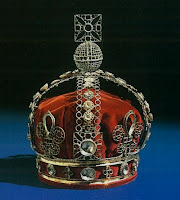 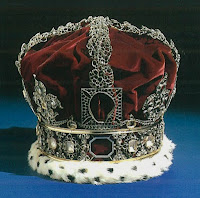 There are some more 'crowns" considered to be part of this collection but not displayed in the Tower of London. 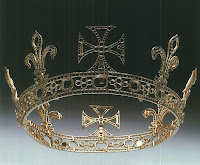 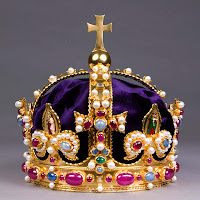 This crown is for all intents a perfect replica using genuine gemstones and original jewelry manufacture techniques from the late 1600's. The only obvious difference to the original crown is the fact that gold plated silver is employed rather than solid gold. The crown was made to replicate historic records and detailed paintings depicting the original. It will be on permanent display from October 2012.

There are three coronets used in past ceremonies of state but that haven't been displayed to date. They are however speculated to still exist within the vaults of Buckingham Palace.


http://www.royal.gov.uk/The%20Royal%20Collection%20and%20other%20collections/TheCrownJewels/Overview.aspx
(All images of the Crown Jewels of the United Kingdom are copyrighted to the Royal Collection. However the images on this blog are considered defaulted to the public domain due to age and ready sourcing from the internet. If an image on this blog is disputed it will be removed following written protest from an authentic source. please contact me at danielgswan@hotmail.com)

Welcome to my blog on the locations of Official and Historic Crowns. All written content is my personal account from research conducted into public sources and published material. All photos are believed to be in the public domain unless otherwise noted at the end of each post. If any images come into dispute, they will be altered or removed if contested legally by an official source. Please contact me at danielgswan@hotmail.com.

The Duke of Swann
I am Daniel, the Duke of Swann and the creator of this blog. I own my own jewellery design studio in South Africa. I consider myself a scholar on the topic of jewellery on the whole but above all I enjoy the concept of Royalty and the jewellery they wear. I also have a great appreciation for the visual arts. I enjoy drawing and digital art and as a skill required in design, I often practice drawing. Finally, I am passionate about Spanish Dancing. My three blogs express these passions and I hope you enjoy the blogs as much as I do.